A Word a Week Challenge: Old

One of the most recognized and oldest of all Roman buildings the Pantheon, a temple consecrated to all gods, was commissioned by Marcus Agrippa (31 BC), and rebuilt by Emperor Hadrian in about 126 AD. It had long been thought that the current building was built by Agrippa, and this was in part because of the inscription on the front of the temple “M·AGRIPPA·L·F·COS·TERTIUM·FECIT” meaning “Marcus Agrippa, son of Lucius, made this building when consul for the third time”.

However, archaeological excavations have shown that the Pantheon of Agrippa had been completely destroyed except for the façade, and Emperor Hadrian was responsible for rebuilding the Pantheon on the site of Agrippa’s original temple.

The original use of the Pantheon is somewhat unknown, except that it was classified as a temple. However, it is unknown as to how the people worshipped in the building, because the structure of the temple is so different from other traditional Roman temples such as in the Roman Forum.

In the 7th century the temple was converted into a Christian church, consecrated to Santa Maria dei Martiri thus being saved from the abandonment, destruction, and spoliation that befell the majority of ancient Rome’s buildings during the early medieval period.

Since the Renaissance the Pantheon has been used as a burial place and now contains the tombs of the famous artist Raphael and of several Italian kings.

The building has been in continuous use throughout its history. Today it is still used as a church; masses are celebrated there, in particular on important Catholic days.

A few facts about the design:

The interior design of the Roman Pantheon is a striking synthesis of tradition and innovation. The dimensions of the interior height and the diameter of the dome are the same (43.2m). The architect, who is unknown, did this on purpose to show the harmony of the building. The marble veneer that we see today on the interior was for the most part added later. However, the Roman Pantheon in its present state allows us a glimpse into the marvelous and stunning world of Roman architecture. The dome would have been gilded to look like the heavenly sphere of all the gods that the name Pantheon evokes. The oculus was an engineering gem of the Roman world. No oculus had even dared come close in size to the one in the Pantheon. It is still lined with the original Roman bronze and is the main source of light for the whole building. As the earth turns the light flows in to circle the interior making the viewer aware of the magnificence of the cosmos. The oculus was never covered and rain falls into the interior and runs off the slightly convex floor to the still functioning Roman drainpipes underneath. 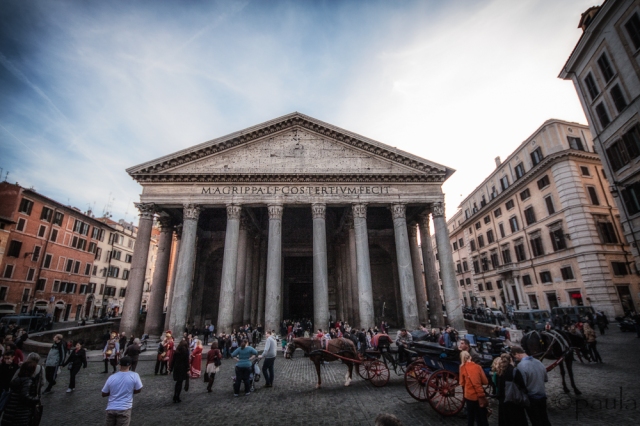 Click here  to find out more about Sue’s challenge.

59 Comments on “A Word a Week Challenge: Old”