If you are not in a rush and have missed some previously posted photos from that trip, you can find them in the travel section on the menu bar (Corsica in the drop down menu).

This Thursday I am inviting you to share a photo of your favourite memento with me, or go theme-less as this non-challenge allows, and share whatever you find inspiring.

Thank you for making this Thursday special with your visits and contributions.

Unlike Paris or Prague, 900 year-old Zagreb did not develop on the banks of a river. Over centuries it had sufficient room to grow at the bottom of Medvednica Mountain, and was reluctant to cross the watercourse. When in the 1930’s the town’s population started to move across the Sava, Zagreb was in need of bridges. The Railway Bridge also known as the “Green Bridge” was built in 1939, and at the time of construction was the longest arch span of all railway bridges in Europe.

Today, the town’s landmark that leads us from the south of the town to the downtown Zagreb, the Green Bridge stands as a symbol of life on the river, a symbol of steadiness, perseverance, constancy, the one thing that remains the same while everything else around it changes as much as the river itself.

P.S. It seemed fair that in spite of all my travels I dedicate my 200th post to my home town Zagreb 🙂

Check out the other entries to Thursday’s Special:

This time I went a step further in my photo post; I wasn’t happy with just posting a photo I had taken on my holidays, and enclosing a song, I felt like writing a music review as well.

What follows is a picture I took on my recent holiday in Lugano, Switzerland, which I titled “Silver Lining”. In the bellow text you will find a track by the same title that matches my picture, a musical review of the band’s first album, and details on my Thursday’s Special non-challenge. 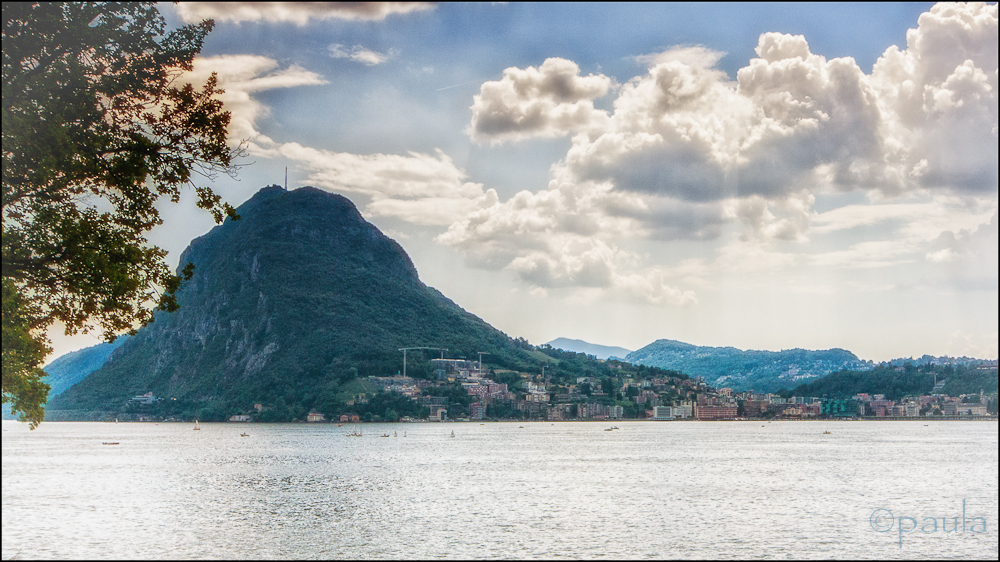 The two guys (Hutchcraft and Anderson) that are behind the “Silver lining” song met some eight years ago when their friends got involved in a fight in front of one of Manchester’s nightclubs. Too drunk to join in, they started talking about music and realising they had similar tastes, decided to start a band. The band named “Bureau” broke up a year later, only to reappear shortly afterwards under the name “Daggers” that claimed to be responsible for inventing disco lento musical genre. In early 2009 “Daggers” was also disbanded, but later the same year these two Mancunians formed a duo called “Hurts” that has been active ever since.

Their first album “Happiness” released in 2010 best known for the hit song Wonderful Life, contains the song “Silver lining” that I discovered by accident on you tube while searching for a musical accompaniment for my “Silver lining” photo.

The album received positive to mixed reviews from music critics ranging from “an ordinary package of overblown melodies and musty lyrical clichés” or “music that moisturizes a touch too much” to “music that harnesses the 80’s whole underpinning pop ethos, its spirit of expansiveness, its shamelessness, its irony-free faith in the emotive power of a glorious hook”.

After having listened to it several times I can only say that I find the album (this song included) flamboyant, daring, rich with flashes of wit and intelligence; an ultimate ode to the sounds of the 80’s. It is more 80’s than the 80’s themselves.

Let me wrap up now with an encouraging quote: “It’s easy to come up with new ideas; the hard part is letting go of what worked for you two years ago, but will soon be out of date.” (Roger von Oech) 😉

Check out the beautiful entries for Thursday’s Special non-challenge:

I’ve decided to start a new series of photo posts that will be published on Thursdays in honour of Jupiter (or Thor – god from Norse mythology) entitled Thursday’s Special, and I would like you to join me and to share your work with me.
A few facts about Thursday, the origin of the name and the reason why I chose it as the day of my new special posts series:
According to some international standard adopted in most western countries, Thursday is the fourth day of the week. In countries that use the Sunday-first convention, Thursday is defined as the fifth day of the week such as in Portugal where it is called “quinta-feira” meaning fifth day of liturgical celebration (the first being Sunday) after Latin “feria quinta” used in religious texts where it was not allowed to consecrate days to pagan gods. In other Romance languages the name for Thursday was clearly derived from Jupiter such as “jeudi” in French, “giovedi” in Italian, or “jueves” in Spanish. In Slavic languages again the number is used such as in Croatian where “četvrtak” means the fourth day. In Hindi the word for Jupiter is Brhaspati, and Thursday is called Brhaspativar, also known as Guruvar in the South Indian languages.

The name Thursday is derived from Old English Þūnresdæg and Middle English Thuresday, which means “Thor’s day”. And who is Thor if not Jupiter (Latin: Iuppiter, Iūpiter) (also called Jove), in Roman mythology, the god of sky and thunder, the king of all gods. The Planet Jupiter which is visible to the naked eye in the night sky and occasionally in the daytime too when the sun is low, was named after it.

Jovian is the adjectival form of Jupiter. The older adjectival form jovial, employed by astrologers in the Middle Ages, has come to mean “happy” or “merry”, moods ascribed to Jupiter’s astrological influence.
This takes us to the symbolism of Jupiter. Jupiter is said to influence all the good and noble things of life, and lead each of us toward a higher purpose. It reflects the fullness of life and absolute freedom.
With this in mind I’ve decided to dedicate these “sacrificial” posts to Jupiter, a jovial god of light to enlighten us and help us expand.

**This is not a challenge; and there are no rules. I will not be giving you themes, but I am inviting you to share with me what inspires you, and makes you happy. If you like my widget, feel free to use it when linking to Thursday’s Special, or just place it somewhere in the widget area on your blog. If you want to take part, it will bring me great joy.

Addendum: At the beginning of 2015 Thursday’s Special turned into a photo challenge and the participants are given weekly themes every Thursday. In a year and a half of posting this event I realised that bloggers are happier when given specific themes for the challenge. The novelty is that as of January 2015 you are invited to participate as guest challengers on my blog and give themes to others. For more details please see Scheduled Challenges page.

When you make a post on the given theme, link it to my challenge post and leave a link to your post in the comments section.