“True beauty grips your gut and squeezes your lungs, and makes you see with utmost clarity exactly what is before you.

True wisdom then steps in, to interpret, illuminate, and form a life-altering insight.”

Maybe the quote above will help you choose the right image for today’s “timeless” challenge. No need to rush. The deadline is next Saturday.

Check out these “timeless” entries:

Broken, but still there

Ponte Emilio aka Ponte Rotto, 178 BC

My entry for the weekly photo challenge: broken.

Here are some photos I took a year ago in Rome. Would you join me for a walk along the Tiber and over to picturesque piazzas and promenades of this eternal city?

A view from Pincio

Weekly Photo Challenge: In the Background 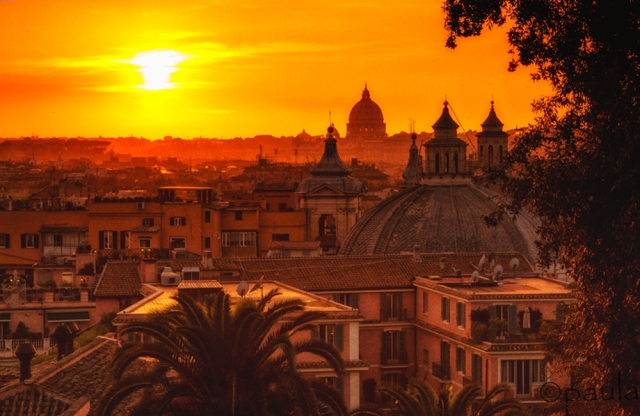 Who’s Gonna Save My Soul?

I have been down lately for all the right reasons, and I have to say the misery is not over yet.

I even thought about giving up on my blog as I felt empty and did not want to transmit the negative energy that had been building up in me for looking at all the evil and senseless events taking place in the company I work for; insane layoffs, unfair criteria in deciding who stays and who goes, with the sole purpose of making the company the right size (to be able to sell it of course), but by sparing all the political appointees (from all the governing parties in the last decade) as well as other dead weight. I know I should feel happy or at least relieved that the management decided to spare me, at least for now, however having witnessed all the intrigues, lies, fights, and slander among my nearest co-workers I felt sicker with each coming day. These past few months have taught me that fear can make people evil, selfish and conniving and that it will take a superhuman power to stay working there and not get affected, as the rumour has it there will be two more circles of firing, and the possibilities on the job market are close to zero.

Anyway, today WordPress kindly reminded me that a year had passed since I had joined the site and made me realise that I should not give up on this place that has always treated me with kindness.

For this occasion I chose a picture of Ponte Rotto (broken bridge) in Rome with some cormorants waiting for their catch….  They should teach me something…. the bridge may be broken, the banks littered with rubbish, but there are still fish in the river.

Thank you for reading, listening and watching. 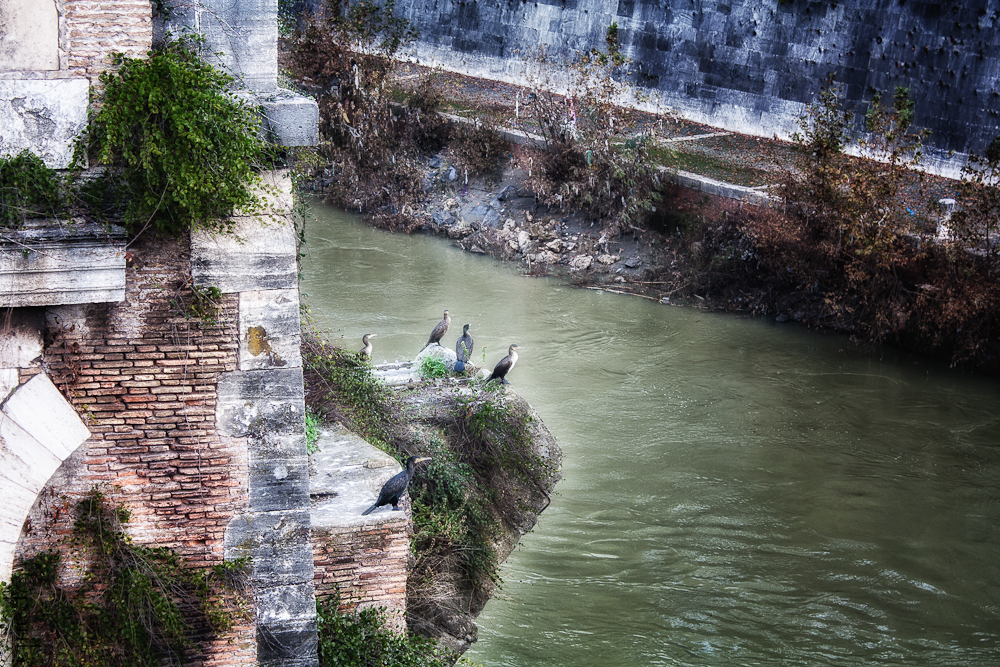 A Word A Week Photo Challenge – Round

For this week’s Word a Week Photo Challenge – Round  I’ve decided to post a photo of the most famous amphitheatre in the Roman world Colosseum, which though not round, but oval in shape, is the best known example of Roman architecture. The word amphitheatre is derived from Latin amphitheatrum, i.e. Gk. amphitheatron, neut. of amphitheatros “with spectators all around,” from amphi– “on both sides” + theatron “theater,” from theasthai “watch, look at.” (http://www.etymonline.com/index.php?term=amphitheater)

The word round thus made me think of another word – amphitheatre. I hope you’ll find this etymology interesting. 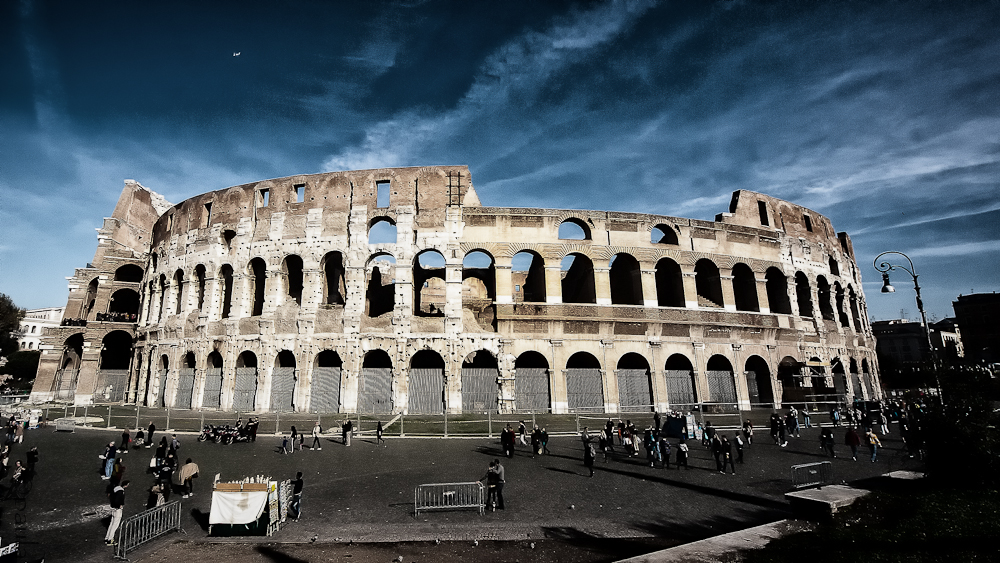 For the latest Jake’s challenge I decided to post a photo of what was Michelangelo’s concept for a piazza in Rome.

It is better that you read a Wikipedia article to get a clearer idea about what you are going to see.

The existing design of the Piazza del Campidoglio and the surrounding palazzi was created by Renaissance artist and architect Michelangelo Buonarroti in 1536–1546. At the height of his fame, he was commissioned by the Farnese Pope Paul III, who wanted a symbol of the new Rome to impress Charles V, who was expected in 1538. This offered him the opportunity to build a monumental civic plaza for a major city as well as to reestablish the grandeur of Rome. Michelangelo’s first designs for the piazza and remodeling of the surrounding palazzi date from 1536. His plan was formidably extensive. He accentuated the reversal of the classical orientation of the Capitoline, in a symbolic gesture turning Rome’s civic center to face away from the Roman Forum and instead in the direction of Papal Rome and the Christian church in the form of St. Peter’s Basilica. This full half circle turn can also be seen as Michelangelo’s desire to address the new, developing section of the city rather than the ancient ruins of the past. An equestrian statue of Marcus Aurelius was to stand in the middle of the piazza set in a paved oval field. Michelangelo was required to provide a setting for the statue and to bring order to an irregular hilltop already encumbered by two crumbling medieval buildings set at an acute angle to one another. The Palazzo del Senatore was to be restored with a double outer stairway, and the campanile moved to the center axis of the palace. The Palazzo dei Conservatori was also to be restored, and a new building, the so-called Palazzo Nuovo, built at the same angle on the north side of the piazza to offset the Conservatori, creating a trapezoidal piazza. A wall and balustrade were to be built at the front of the square, giving it a firm delineation on the side facing the city. Finally, a flight of steps was to lead up to the enclosed piazza from below, further accentuating the central axis.

The sequence, Cordonata piazza and the central palazzo are the first urban introduction of the “cult of the axis” that was to occupy Italian garden plans and reach fruition in France.

Executing the design was slow: Little was actually completed in Michelangelo’s lifetime (the ‘’Cordonata’’ was not in place when Emperor Charles arrived, and the imperial party had to scramble up the slope from the Forum to view the works in progress), but work continued faithfully to his designs and the Campidoglio was completed in the 17th century, except for the paving design, which was to be finished three centuries later. http://en.wikipedia.org/wiki/Capitoline_Hill

For this challenge I went with three different concepts I have of the piazza. The more natural one, the funky one, and the one I like best as it is closest to how I had pictured it.

I wonder which one of my photos Michelangelo would hate least 😉

Listen to some music while you are here … 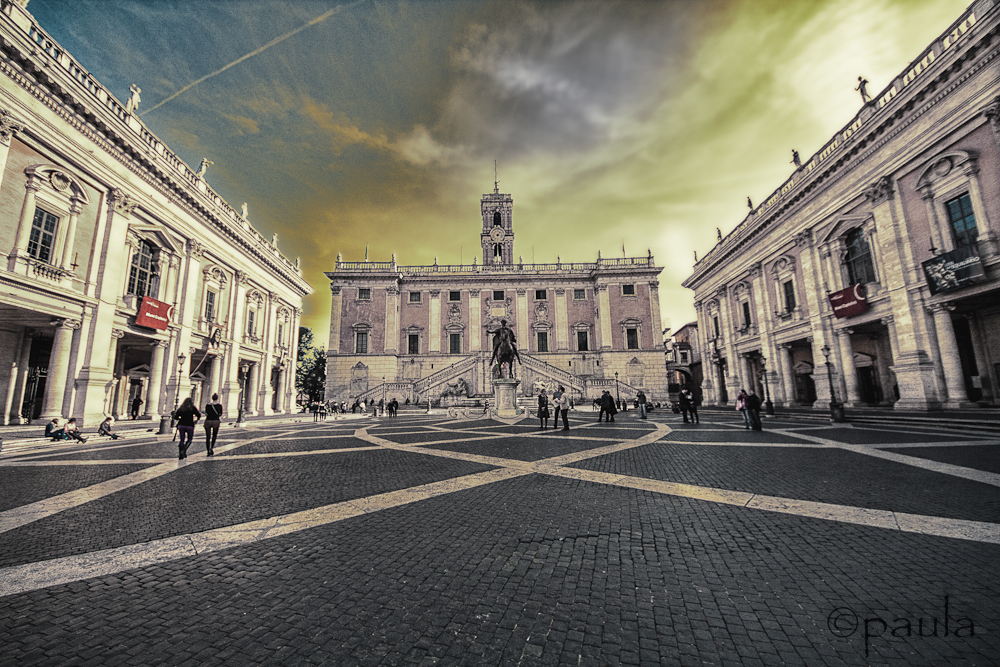 Rome does not need an introduction. Everything has been said about Rome.

Be happy for me and listen to Felicita with me… 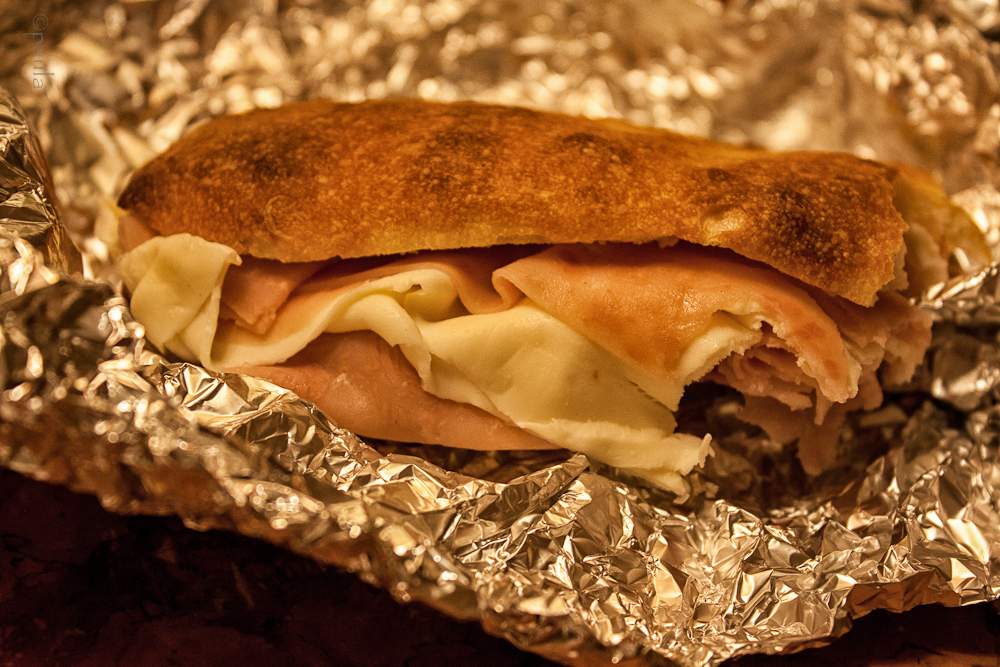 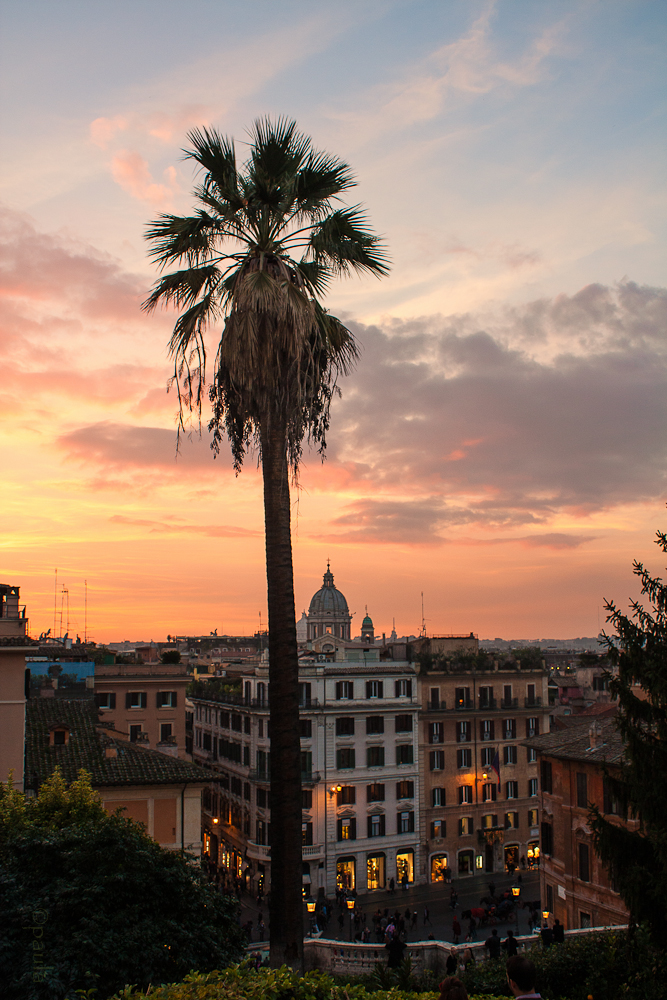 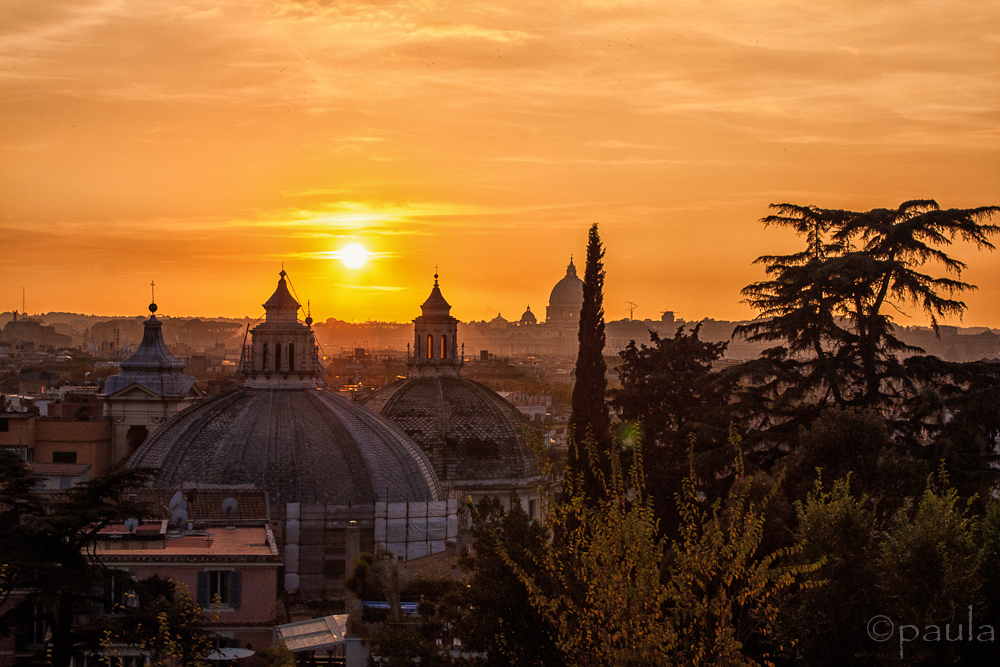