Most visitors to Croatia when coming to Istria go to its coastal area and fail to visit its picturesque countryside in the hinterland. The interior of our largest peninsula holds many gems hidden in small medieval churches. One of them is Sveta Marija na Skriljinah (St Mary’s), situated in the woods one kilometre away from Beram, one of the oldest settlements on Istrian peninsula.

The year was 1474 when Vincent from Kastav (Vinko in Croatian) with the help of two assistants painted murals in this tiny Gothic church. The thing that sets it apart from other sacral art in the surroundings is the famous mural of  “Dance macabre” on its west wall (above the entrance).

At the time of the construction, Istria, as many other parts of Europe, was plagued by “Black Death” which influenced the concept of death that was from then onward known as the “Grim Reaper” and shown as a skeletal figure carrying a large scythe. Indiscriminately, it is taking away all castes of society: the bishop, the king, the queen, the pub owner, the child.

The entire wall art in St. Mary’s is divided into 46 painted sections mostly showing scenes from the Bible. The reconstruction and enlargement of the church that happened in the 18th century when a portico was added were devastating for the frescoes on the main entrance where two windows were installed. As it happens, the scene depicting the original sin was completely ruined, and now you can only see Adam’s and Eve’s legs.

It took me five visits to Istria to finally make it to Beram. The church in the woods is only opened for scheduled visits, and you are supposed to go to the village first, find the priest, get the key, and then go to the woods. That autumn morning when I entered Beram, the main church in the village (the one you can see in the photo with panoramic view of Beram) was closed, the priest was nowhere to be found, but we went to the woods anyway. The outer appearance of this little Gothic church (reconstructed in the 18th century as Neo Romanesque) wasn’t promising and the door was closed so we were about to leave when a bus of tourists with a guide holding a key stopped by, and we conveniently sneaked in.

I left the place with mixed feelings: excitement that I finally got to see the frescoes that are not that frequent in our sacral buildings, and disappointment at the oblivion of Saint Mary’s and little efforts made to save it from the ravages of time.

A road to Beram with the Parish Church of St. Martin in sight.

Wrong church! This tower belongs to St. Martin. The church is being reconstructed, and priest nowhere to be found.

Finally, the Church of St. Mary’s on Skrilinah. Imagine my disappointment when I saw a tower-less church.

A detail from the Dance Macabre scene showing a few Grim Reapers dancing with their victims. The most picturesque is the pub owner.

The large mural on the north wall is showing the Three Wise Men bearing gifts to baby Jesus. It is 8 metres long.

A crowd of tourists marvelling at the Dance Macabre mural. 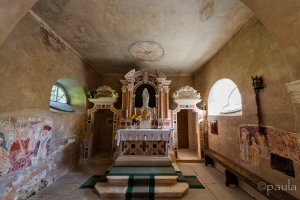 This would be the altar.

This beautiful ceiling was fitted in the 18th century; still my eyes wonder to the Dance Macabre scene above the door.


This is my entry for Jo’s Monday walk. Pay her a visit and find out where she is taking you today.