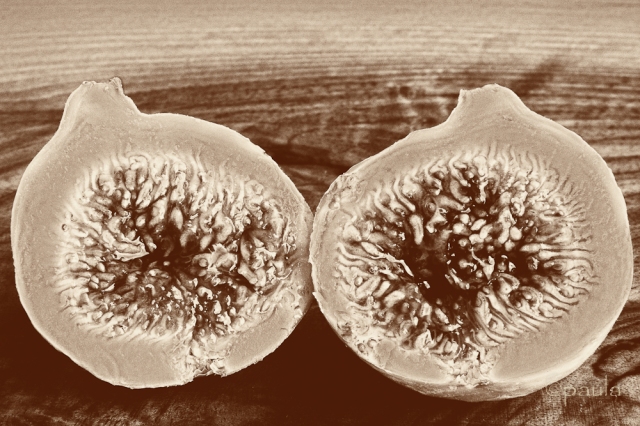 Common fig also known as just fig or scientifically Ficus Carica is a species of flowering plant belonging to the mulberry family of fruits along with mulberries, breadfruit, and osage orange.

Now, what I wonder about is what makes the common fig so common?

Is it the fact that it is the oldest cultivated fruit on Earth; (scientists have recently discovered that figs had been cultivated for more than 5,000 years when nine carbonized figs were unearthed in the early Neolithic village of Gilgal in Israel); the fact that it is widely spread all over Western Asia, and the Mediterranean coast of both North Africa and Europe, and that it found its way to the Americas, or the fact that its leaf was used throughout art history as a medium of censorship which has its origins in Adam’s and Eve’s expulsion from the Garden of Eden?

Fig is a uniquely nutritious fruit with the highest amount of calcium of any fruit, and it’s an excellent source of dietary fibre, which makes it one of the best natural laxatives; it is an excellent antioxidant that may prevent some types of cancer and according to some recent studies can be used in diabetes prevention too. Its nutritional benefits are abundant, and here is another fact that you may have ignored: fig leaves are surprisingly healthy too; in some cuisines they are used for cooking, as wrappers for fish or meat.

Be as it may, the figurative use of the word fig in many languages suggests that this valuable, though common, fruit has been slighted.

You must have heard or even used the expressions ”not worth a fig“ or “I don’t give a fig“. In Italian “non vale un fico secco“ means ”not worth a dry fig“; in French: “faire la figue à quelqu’un” means to make fun of somebody. The Spanish say “me importa un higo” which is equivalent to the English “I don’t give a fig” etc. The depreciation of figs has crept into my language too, (maybe through Italian), despite the fact that dry figs are a well-known delicacy and are often enjoyed with a glass of grappa – grape brandy.

Can this derision of the fig be attributed to the biblical account of Jesus’ irritation with a fig tree from which he desperately tried to pluck a fruit in April!? Peeved for his fruitless attempt, he then cursed the tree which withered the following day. Shouldn’t he have known better?!

Here is another idea:

May contempt for the fig have its origins in the biblical story of the Garden of Eden, and the tree of knowledge bearing the forbidden fruit, the same fruit that is responsible for Adam’s and Eve’s expulsion from paradise? Scientists are still guessing the identity of the fruit since the traditional depiction of it as apple does not hold water; apples were unknown in Ancient Israel and Bible was never specific about what fruit it was. The fact that apples got associated with Eden only in 500 AD when Bible was first translated into Latin, tells us that it was simply an error of ambiguous translation brought on by Latin homonym malum(us) having two meanings “evil” and “apple”.

Though some scientists guess that the forbidden fruit was the pomegranate considering it was the most cultivated fruit in Ancient Israel, others claim that it was most probably the fig, quoting that a fig leaf was used to cover Adam’s and Eve’s nudity when they were chased out of Eden.

This is one riddle that will probably remain unsolved, but I wish I could figure it out.